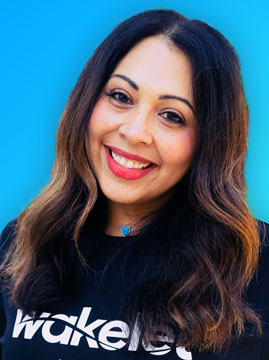 Tisha Poncio has always been ahead of the curve. As an undergraduate working on a degree in secondary education in the 90s, she wanted to use her natural ability with computers encouraged by her father to work on a concentration in computer education with her English Language Arts concentration. Her college didn’t offer anything like that, so they allowed her to take classes in Computer Information Systems, where she was one of 2 females in the program. She spent hours with her professor, Dr. Lynn Mason, who was also one of the few females in computer programming, getting help with understanding computer logic, coding, and programming. The impact this experience had on her has been enduring. Tisha learned to persevere and when she thought she couldn’t do something or if someone told her it wasn’t for her, that just meant she would show them what was possible.

After graduation, Tisha taught in her high school classroom but also became a tech helper by assisting colleagues with their technology. The superintendent of Celina Independent School District was early to adopt the idea of having an Instructional Technology Coach, so Tisha took on that role coaching teachers at both the elementary and high school level. After 13 years into that role she took advantage of being solely at the high school campus in 2017, and she started a student technology leadership team. This group of students pushed her to learn more and look into what she still needed to know as an educator, which is what brought her to the University of North Texas to work on her M.S. in Learning Technologies. When she told others of her plans to go to graduate school, many encouraged her to get an administrator’s degree, but, being ahead of the curve as usual, she wanted to stay in and develop her expertise of technology to impact students and teachers both now and in the future.

At this time, the students on her technology leadership team began designing student digital portfolios using a digital tool called Wakelet. She was inspired by their validation of student voice and choice to use the best tool they saw fit for the project and their submissions were phenomenal. This caused Tisha to rethink how she created space for students to lead and teach her. Wakelet is based in Manchester, UK, but Tisha was able to meet the team at an educational technology conference in 2019, and she knew they were doing something incredible.  She says that meeting is what helped to springboard her into her current position, Digital Learning Specialist at Wakelet.  She is now in the perfect position to engage globally with  educators who want to impact their students and also has the background to work with Wakelet’s teams, including the developers. When asked what she loves most about her work she says, “I get to work with educators on a global scale and impact students all over the world.”

Tisha credits the Learning Technologies department for reinforcing her knowledge and providing the space to explore with its research focus. She also wants to thank Dr. Christina Churchill, Dr. Amy Greene, Dr. Lynn Cox, Dr. Michael Robertson, Dr. Yunjo An, and Dr. Regina Kaplan- Rakowski for their leadership and guidance. She learned to continue to be open to change and learning, and even now she is exploring the next challenge, learning about Web3, NFTs, and the metaverse by reading The Metaverse: And How it Will Revolutionize Everything by Matthew Ball. She wants to be at the forefront of making digital technologies work in ways that lead to jobs that don’t exist yet. To stay ahead of the curve and keep reaching for something bigger, Tisha says you need to be prepared. Clearly, she will be.

Tisha Poncio will speak as part of the CODE Series on October 11, 2022 and will discuss her journey from the classroom to industry and how her education in Learning Technologies has helped her accomplish her goals. Learn more and register here: https://ci.unt.edu/code