ALERT: Details related to UNT's response to the novel Coronavirus
and its effects on the College of Information. 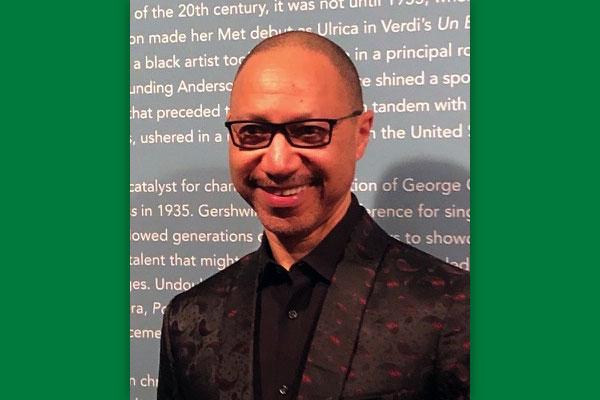 Since it’s founding, New York City’s historic Metropolitan Opera (Met) has long been the home for the most creative and talented singers, conductors, composers, musicians, designers, visual artists, choreographers, and dancers from around the world. Met scholar and College of Information faculty member Dr. Maurice Wheeler, was asked to curate a new exhibit to highlight the historical contributions of Black Voices at the Met as of part of the 2019-2020 season opening performance of Porgy and Bess.

Wheeler, an associate professor in the Information Science department, says he’s grateful that his work will remain on exhibit throughout this year. The COVID-19 outbreak closed the city’s museums but he doesn’t see this as a setback. Wheeler sees an opportunity for more students to be able to explore when shelter-in-place restrictions are lifted.

“The exhibition has not yet been placed online. Current permissions given regarding (exhibit) materials allow usage only in the in-house exhibition. The exhibition was scheduled to remain through mid-summer. However, because of the Coronavirus pandemic, the exhibition will likely remain available through the fall, when hopefully school children have returned to school,” says Wheeler.
The exhibition is located in the Founders Hall galleries at the Met. The opera house would normally be open weekday mornings and during evening performance in the building. Wheeler says the new production of the opera Porgy and Bess is significant and called for additional historical context.

“After a few discussions, the decision was made to expand the exhibition beyond Porgy and Bess and include the full history of African American presence at the Met from as far back as could be traced to the present. The core exhibition materials would be selected from the Met's archival collection and supplemented as necessary from other archives around the country,” says Wheeler.
Wheeler is also a known scholar on black American Opera singers and was invited to participate in considering his prior experiences with the archives. It was his research from an ongoing book project which led him during this curation process.  Wheeler’s research began with imagery of minstrel performers at the end of the civil war. He adds that in the 1800s there were black performers associated with minstrel shows who were talented, well-trained, and nationally known singers of classical music but their performances in white spaces were prohibited because of their race, such as Sissieretta Jones.

“The project took shape based on the materials that the curatorial team selected both at the MET and from other institutions. That process often required researching topics that we had not previously encountered, such as the late 19th century Met performance of famous minstrel performers Bert Williams and George Walker. As a content curator, the tasks spanned the entire creative process from conception through input on design,” says Wheeler.

Together with the assistance from the Met archives staff, Wheeler and other curators developed the concept into a "story" selecting each item to be displayed and then worked on securing the permissions, more research, and writing all texts and descriptions.

“In addition, I was asked to participate in the production of the exhibition's companion CD of historical recordings of African American performances at the Met. For that project, I wrote all liner notes. Bobby McFerrin, whose father, Robert (McFerrin), was the first African American male to perform a role at the Met, agreed to write the foreword,” says Wheeler.
Part of the exhibit includes a telegram from Dr. Martin Luther King Jr. to Met General Manager Rudolf Bing. King was critical of the Met's annual tour of southern theaters which were all segregated, like the Fox Theater in Atlanta, King’s hometown.

“The exhibition contains King's telegram and Bing's response. The racial integration of the Met's roster of singers in many ways mirrors the challenges in American history and contemporary society. From the late 1800s through the 1980s, Met's policies and practices on race are a reflection of America's social-political struggles with race. Yet, during the turbulent late 50s through the early 1970s, the Met was a leader in making bold steps that addressed its former racist and restrictive practices,” says Wheeler.

The Met is offering live streaming of performances to students as the opera house remains closed during the pandemic.

The Gershwins’ Porgy and Bess—Special Events

Black Voices at the Met